The Connection Between Music and Science - Musical Instrument Museum

Ever wonder why certain instruments sound the way they do? Whether it’s an acoustic guitar, an Indonesian gambang (xylophone), an octobasse, or a Japanese shakuhachi (notched flute), every instrument makes a unique sound, thanks to science! Pick any instrument and you’ll find that the maker likely designed it purposefully and carefully to create something that produces a very particular sound. Science is deeply ingrained in many aspects of the arts, especially music. This becomes clear when looking at music through the lens of STEM education. 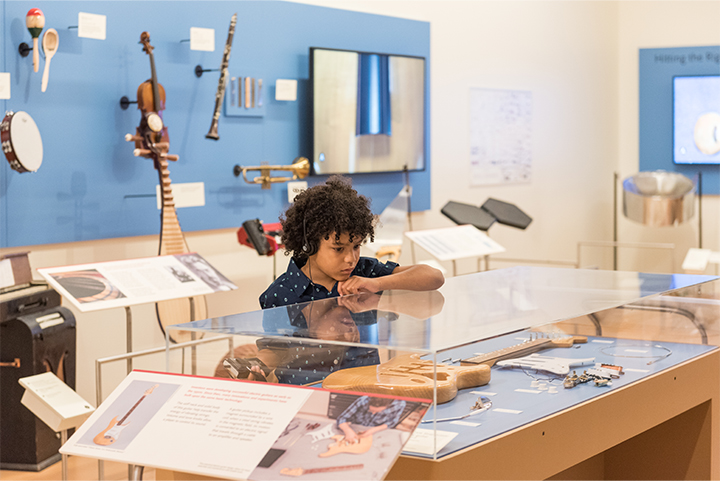 STEM is an acronym that traditionally stands for science, technology, engineering, and math. These days, STEM commonly includes the arts, which is why it is also sometimes called STEAM.

MIM’s Collier STEM Gallery was designed to highlight the inherent connection between science and music. The gallery explores sound creation, technological innovation, the human ear, hearing safety, and more. Its displays introduce key concepts in the physics of sound through original videos, interactive technology, and instruments from around the world, including a deconstructed Fender Stratocaster electric guitar that shows how technology brings the iconic instrument to life.

Aside from exploring the technology and engineering used to make instruments, the most fundamental way to explore the science of music is to answer the question “How is sound made?”

A tour through MIM’s galleries will highlight the wide variety of musical instruments that exist throughout the world. Whether bells, pianos, flutes, or drums, instruments have their own distinct look and sound. However, every instrument shares one key characteristic: they make vibrations.

Vibrations, or rapid back-and-forth motions, are essential for sound. They occur when an energy source interacts with an object to cause a disturbance—a finger plucking a guitar string, air blowing across a saxophone reed, or a mallet hitting a drumhead. When a string, reed, or drumhead vibrates, those vibrations cause air molecules to knock into one another in repeating patterns known as sound waves. The sound waves travel through a medium, usually the air, to your ear. The waves vibrate your ear drum, and you hear sound. Sound waves have four important properties: amplitude, wavelength, speed, and frequency. 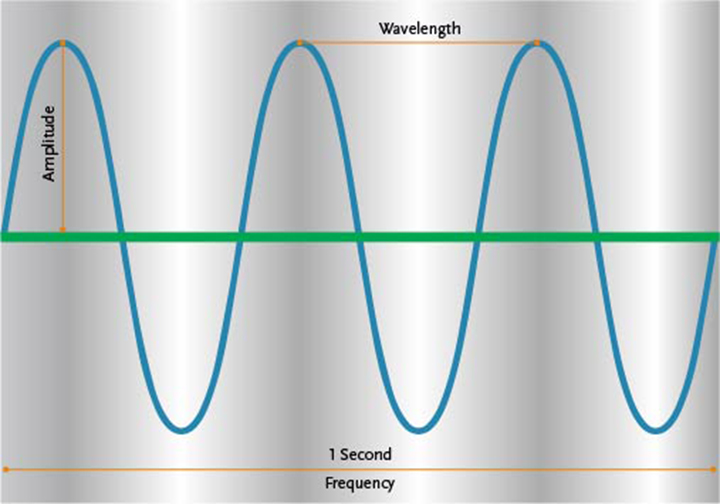 We can’t see sound waves as they come out of an instrument, but the graphic above can help us understand the structure of a basic sound wave. The gray background represents the density of air molecules. Vibrations push air molecules closely together, increasing their density (shown in dark gray) and pull them apart, decreasing their density (shown in white). This sets up a pattern of compression and rarefaction, or regions of high and low pressure, that can be traced along the blue line. The crests, or peaks, of the line are the moments of greatest density, and the troughs, or valleys, are where the molecules are the least dense.

The amplitude of the wave indicates the amount of energy the wave carries.

For example, if you hit a drum with a lot of energy, the vibrating drumhead will cause air molecules to knock into each other with a lot of intensity. The difference between points of high density and low density will be extreme. If you tap it gently, the vibrations won’t push air molecules around as much. The distance between the peaks and valleys in the sound wave and the baseline resting position of the molecules on the density graph won’t be as great. In other words, the sound wave from a drum you hit with a lot of energy will have an amplitude much greater than a sound wave from a drum you barely hit.

You can think about amplitude in terms of loudness: the greater the amplitude, the louder the sound.

The speed of a wave is how fast the wave is traveling. Waves travel at different speeds if they are traveling through air, water, or a solid object, such as wood.

Frequency is commonly measured in hertz, which measures how often a wave pattern repeats in one second.

Understanding the Unique Sound of an Instrument

Now that we’ve looked at the core properties of sound waves, let’s dive into the science behind the unique sounds of instruments.

Each instrument’s sound is a complex combination of frequencies that create a unique tone. The quality, or color, of that tone is known as timbre (pronounced TAM-ber). One way to illustrate this is to capture sound with a waveform graph, seen below. 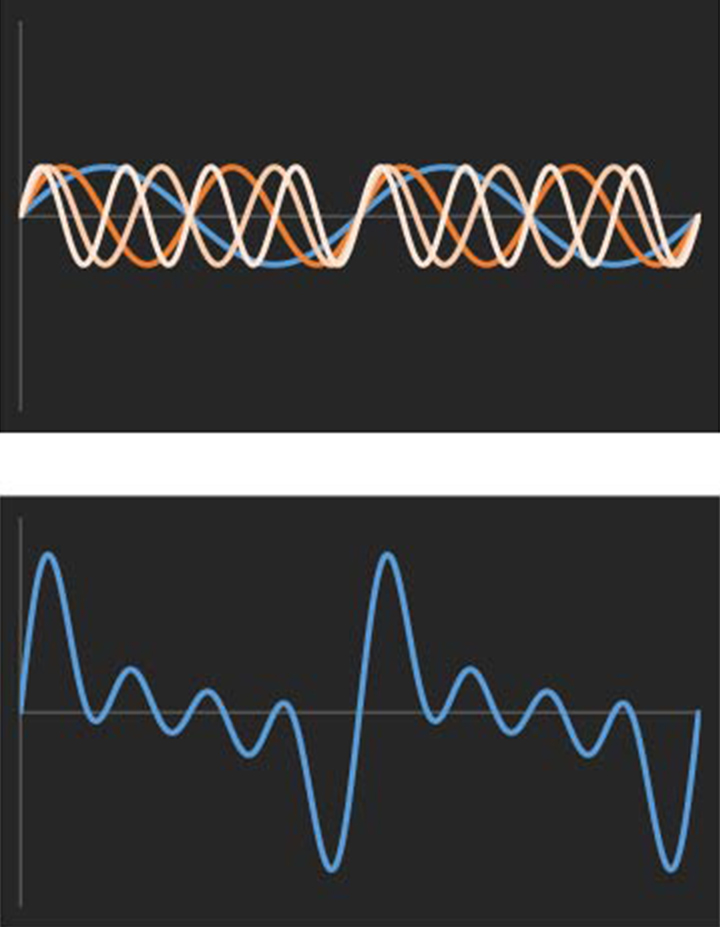 These waveform graphs are visual representations of sound waves. Combining the fundamental frequency with several harmonics (top) results in a complex waveform (bottom).

Waveform graphs showing the same note played on different instruments will look different. Each will show a waveform that vibrates at the same frequency. This frequency is known as the fundamental, which determines the pitch, or note, that we hear. But each instrument will have its own unique repeating wave pattern. 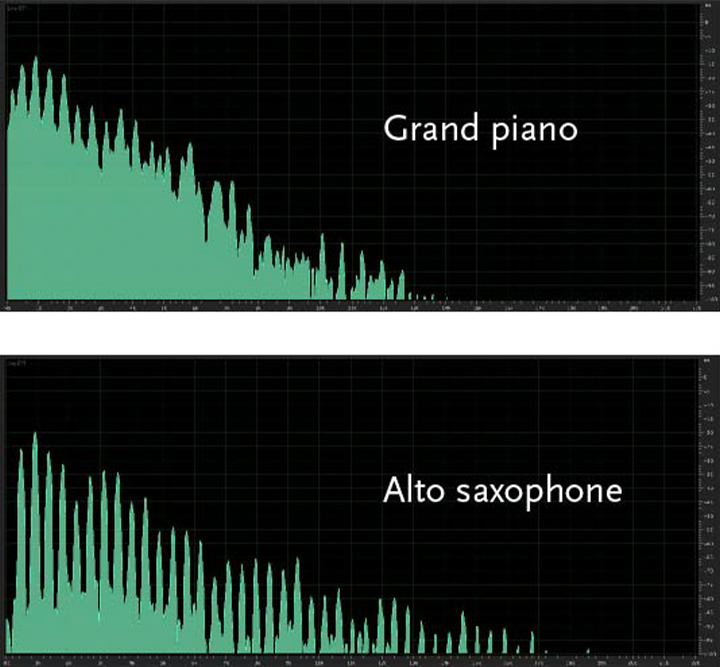 A frequency analysis shows the same note (an A at 440 Hz) played on two instruments. Each spike represents a harmonic in the sound.

For example, an A note played on a piano will look different in a waveform graph than the same A played on an alto saxophone. Both instruments will have played the same pitch, but their tonal characteristics will vary greatly, as you can see in the graph. This is due to additional frequencies called overtones or harmonics. How loud or soft various harmonics are relative to each other is a major factor in an instrument’s timbre. Vibrato (slight pitch variations that create a wavering effect) and the attack and decay of notes (how the notes begin and end) also contribute to an instrument’s timbre.

For an interesting timbre comparison between two very different guitars, listen to the Narciso Yepes 10-string acoustic guitar, which is made out of wood, in the video above. Then compare it to the video below, which features a South African oil can guitar made from repurposed materials.

Instrument makers select specific materials to achieve specific sound qualities. For example, guitar makers might choose a specific combination of woods, such as spruce and mahogany, to make a guitar with a certain kind of tone. This is why the different woods used on instrument bodies are commonly called tonewoods.

Even when using the same wood combination on the same instrument, like an acoustic guitar, many other factors, such as instrument size and wood density, affect the instrument’s tone. The same goes for electronic instruments—materials such as pickup magnets, wiring, capacitors, and other elements that bring electric sounds to life affect tone and timbre.

Some instruments, such as Stradivarius violins, are revered for their impeccable tonal characteristics. In this video, luthier Gregg Alf talks about the science behind the creation of the Stradivarius violins, some of which were featured in MIM’s 2016 special exhibition, Stradivarius: Origins and Legacy of the Greatest Violin Maker.

Discovering the Science of Sound at MIM

The science of music is an incredibly layered and complex subject that people dedicate their lives to fully learning, but the topics covered here are a great way to get a basic understanding of the science that can be found in music—and throughout MIM’s galleries. 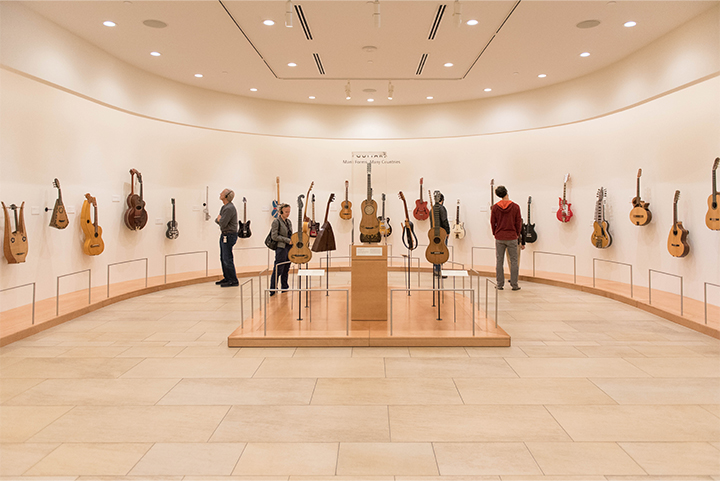 Science and music come together at MIM outside of the Collier STEM Gallery. In the Geographic Galleries, for example, you can see and hear thousands of instruments from around the world. And in the Experience Gallery, you can make music and explore the science of sound by playing a variety of instruments, including Javanese gamelan instruments, a Peruvian harp, and a unique electronic instrument called a theremin. The blend of science and music can also be experienced through MIM’s various field trip programs, which include guided tours and hands-on learning opportunities for all ages.

The next time you listen to music, see if you can hear the different tonal qualities the instruments produce. Just remember—your favorite songs are filled with science!

Want to learn more about different instruments and the unique sounds they make? Watch this video from MIM’s Conservation Lab with curator Rich Walter for an in-depth look at some incredible mandolins.