A gilded instrument from a piano-making dynasty

In the nineteenth century, world’s fairs and international expositions displayed cutting-edge technologies as a celebration of national pride and ingenuity. They provided a window through which ordinary attendees could experience cultures from around the world. Musical instrument makers at these elaborate events showcased new inventions and improvements, as well as lavishly decorated showpieces. One such attraction—MIM’s newly acquired Erard grand piano—debuted at the 1889 Exposition Universelle in Paris alongside the newly built Eiffel Tower. More than 28 million people attended the exhibition in the six months it was open to the public. The ornate piano now displayed at MIM won “Grand Prix” honors with its magnificent ormolu, or gilded bronze, decoration and advanced craftsmanship. In European circles, the famed Erard name also lent this art case piano added distinction. 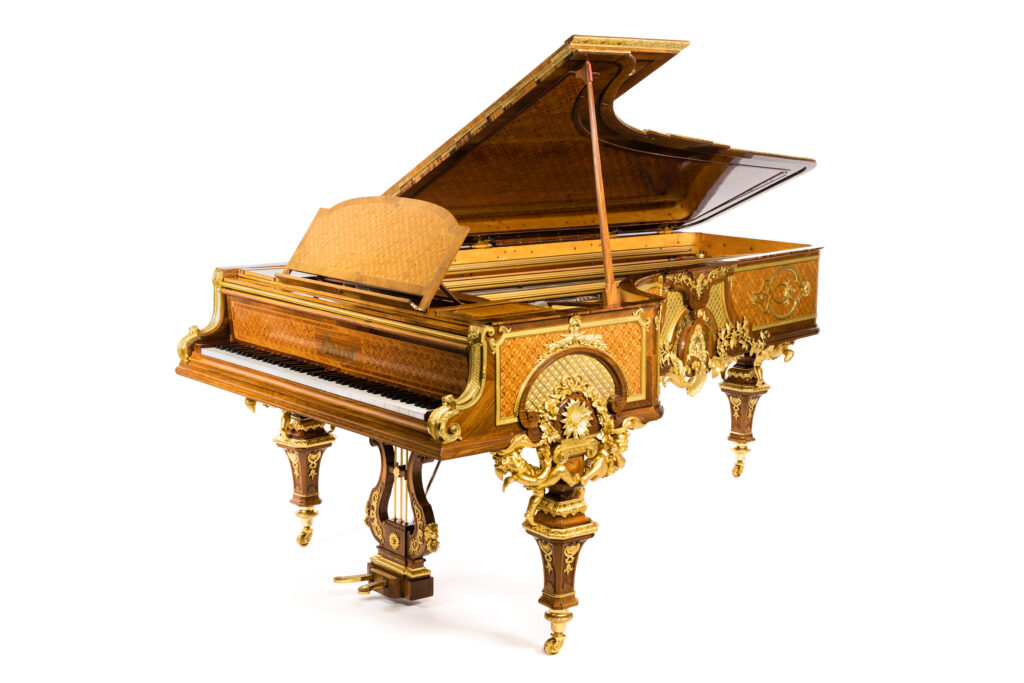 The Erard instrument-making dynasty spanned more than 150 years, producing pianos that would become synonymous with technical excellence and beauty. Born in Strasbourg, Alsace, in 1752, founder Sébastien Erard left home at 16 to work as a harpsichord apprentice in Paris, France. His innovative techniques and impressive skill were almost immediately apparent, and he caught the attention of the powerful Duchesse de Villeroi. Erard formed an independent workshop with her support in 1777 and built his first pianoforte. The Erard name became famous among the French nobility and in artists’ circles after the instrument was heard in the Villeroi salon.

As a young man, Erard made French queen Marie Antoinette one of his new creations— a hybrid instrument with two keyboards, one for the harpsichord and one for the organ. He reportedly made it specifically to suit her vocal abilities, changing the keyboard position and strings to accommodate a lower range.

Erard fled at the onset of the French Revolution, setting up a workshop in London and attaining similar popularity in the years he resided there. Leaving his London workshop in the capable hands of his nephew, Pierre, Sébastien returned to Paris, where he continued to reimagine and improve his instruments.

At the beginning of the nineteenth century, the popular large orchestra necessitated that the loud and full tones of Romantic composers could be heard in concert halls. As well as patenting other improvements on the piano, Sébastien Erard invented the double-escapement action, an updated mechanism by which the keys activate hammers and strike the strings. This milestone in piano development finally offered pianists a combination of speed and repetition with expressive subtlety; this feature remains standard on pianos today.

In 1839, England’s Queen Victoria appointed Pierre Erard “Pianoforte Maker to Her Majesty.” Prince Albert, Queen Victoria’s beloved husband, also favored Erard pianos and commissioned a horizontal grand piano in the Renaissance style. The Erard family’s association with members of the French and British royal families, as well as aristocracy from both countries, created a fashionable mystique backed by substance.

Now on display in the Europe Gallery as part of the France exhibit, MIM’s singular Erard piano still awes and impresses with its elaborate decoration and imposing stature.