Presented in partnership with the prestigious Henan Museum, MIM’s exhibition explores the harmony between music, people, heaven, and earth through more than sixty extremely rare instruments and artworks on display for the first time in the United States.

Ancient flutes and drums harken back to the dawn of Chinese civilization, giving us a glimpse of the musical life of an early agrarian society. Grand racks of bronze bells evoke elaborate rituals performed during the formative years of Chinese culture. Lively ceramic figures illustrate the joyful mixing of cultures during the time of the legendary Silk Road. Elegant silk strings entertain gatherings of refined music lovers and inspire poetic contemplation.

In addition to a collection of exquisite musical instruments, the exhibition also features beautiful music-related artworks made of materials such as ceramic and jade. Many of these instruments and artworks were excavated from tombs of nobility. Highlights of the exhibition include: 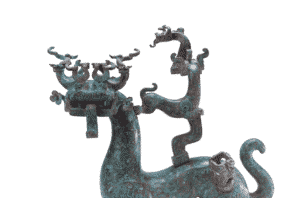 Using interactive technology to explore the exhibition, guests will see, hear, and feel the harmony of the ancients.

Ancient Musical Treasures from Central China: Harmony of the Ancients from the Henan Museum will be open November 10, 2017, to May 6, 2018, at MIM’s Target Gallery.