Early twentieth-century instruments made by Luigi Embergher and Lucien Gélas

MIM recently acquired the Zéliker Collection, which contains 64 rare, interesting, and beautiful mandolins and other plucked lutes from around the world. A musician, teacher, and conductor from Paris, France, Raymond Zéliker passionately collected mandolins and other plucked stringed instruments for decades. He discovered his love for music as a young boy when he began taking mandolin lessons at age 10, going on to learn the mandola and the violin as well. After World War II, Zéliker formed the mandolin orchestra Clair Accord with former students and other musicians, performing 320 concerts over 36 years.

One of the many special instruments that MIM obtained from Zéliker’s collection is a maple-bodied No. 5-bis mandolin made by Italian luthier Luigi Embergher in 1922. Born to a woodworking family in Arpino, Italy, Embergher became an independent luthier by 1888. His instruments—especially the mandolin—were celebrated internationally for their tone quality, ergonomics, and beauty. His success as a luthier was so great that Embergher was knighted as a Cavaliere della Corona d’Italia, or Knight of the Order of the Italian Crown, in 1913.

Over the course of his long career, Embergher introduced several innovations to the mandolin. He improved sound quality by using a “teardrop” soundbox design and repositioning the sound table’s bars diagonally. The luthier also extended the range of his 5-bis mandolin model with a special elongated fingerboard under the first and second pairs of strings. By the 1920s, many professional performers and soloists considered Embergher’s mandolins to be the best in the world. His instruments remain coveted by musicians today.

Within a 1926 self-published catalog describing the models made in his workshop, Embergher writes with undeniable pride, “I have achieved a powerful, warm tone and a precision in sound which is unequalled, a fingerboard with an easy playability, a unique and elegant design; a complete perfection.” 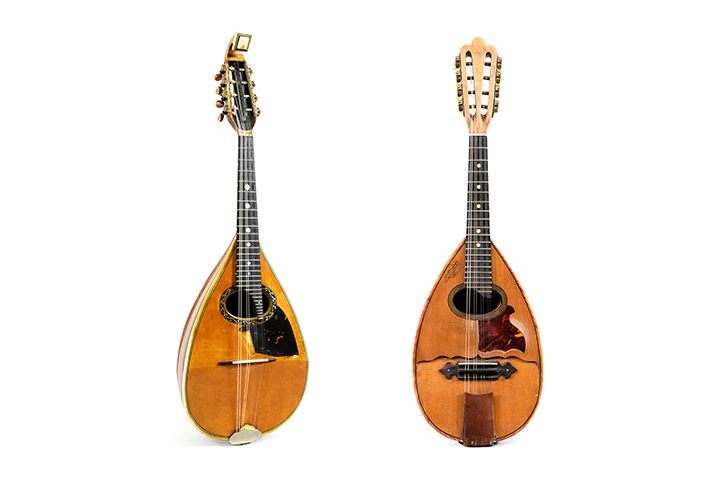 Another notable example from the collection is a mandolin designed by the French master Lucien Gélas in the 1920s. Gélas instruments, including guitars and mandolins, were popular in France at the turn of the century; mandolin players often formed large associations.

An innovative luthier whose instruments are extremely rare today, Gélas was born close to the Italian border in Menton, Alpes-Maritimes, France, in 1873. He was a classical guitarist, composer, and teacher, who was renowned for inventing and patenting unique guitar and mandolin designs that used a double top, or “double resonance,” to achieve greater pitch. Gélas went on to win gold medals for his double-top instruments at the Bordeaux Exhibition in 1907 and the Brussels Exhibition in 1910.

Its thought-provoking construction, appearance, and rarity make this early twentieth-century Gélas mandolin a significant addition to the museum’s collection. With the acquisition of the Zéliker Collection, MIM now possesses an especially rare matching set of Gélas-designed mandolin, mandola, and mandocello-sized instruments.