Nestled between the Artist and Experience Galleries on MIM’s first floor, the Mechanical Music Gallery is full of ingeniously designed instruments at the intersection of technology and music. These self-playing machines use prepared wooden barrels, metal discs, perforated paper rolls, and other formats encoded with musical compositions. Often powered by hand cranks, spring motors, or bellows, these inventions produce sound through amazingly coordinated intricate parts, and they still reliably operate as they did more than a century ago. 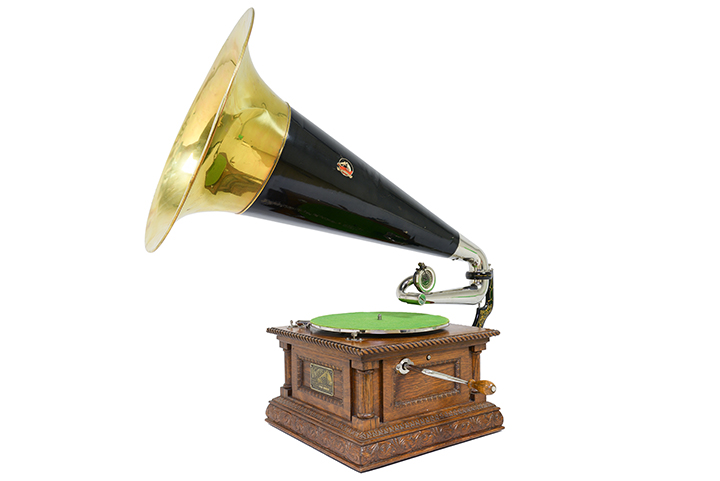 A Monarch Special phonograph made in 1904 by the Victor Talking Machine Co.

Near the entrance into the gallery from El Río is the newly installed Phonographs exhibit. Invented in the late 19th century, phonographs made the recording and playback of sound possible. Accurate recordings of voices and musical instruments were captured in the grooves of wax cylinders or discs and made audible through a vibrating needle and an amplifying horn. For the first time, musicians’ live performances could be recorded, then purchased and enjoyed in people’s homes, paving the way for the commercial music industry.

By the 1920s, electric technologies, including live radio broadcasts, signaled the end of the golden age of mechanical music. But phonographs, like the ones exhibited in the Mechanical Music Gallery, also opened the door to the recording formats that followed. Vinyl LPs, cassette tapes, and today’s high-definition digital recordings all trace their roots back to the success of the phonograph.