In this series, we take a look at the worldwide journeys of instruments joining MIMʼs collection.

Crafted between 1850 and 1875 by the Ngbandi people in the Central African Republic, a recently acquired set of twin harps, designed as two distinct male and female instruments, came to MIM via an approximately 11,000-mile, 150-year journey.

The instruments began their travels in 1894, when French military officer Captain Alexandre Remy collected them while securing land for the French government and protecting the local communities against Sudanese slave and ivory traders. The harps joined Remy as he began his voyage back to France, down the Ubangi River, across the Republic of Congo, through Gabon, and by sea along the Atlantic coast of northwest Africa. 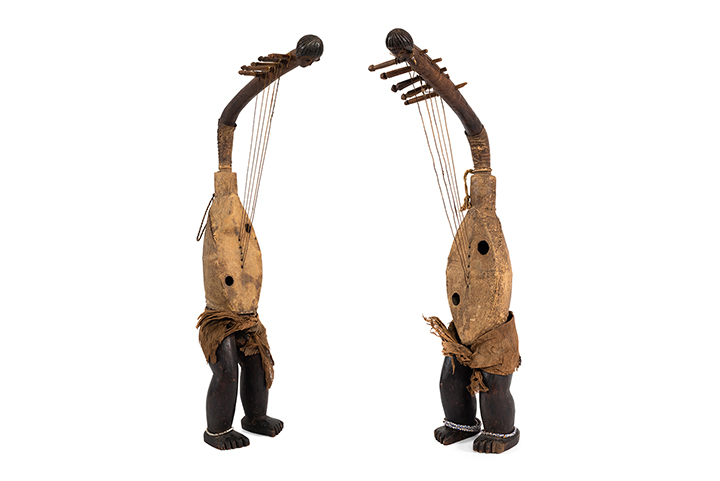 Eventually arriving in Nancy, France, the harps resided with Remy’s descendants until 2012, when they were bought from the family by MIM board of directors member and international expert on African art, Marc Leo Felix, who kept them in his Brussels private collection. Despite their extensive journey across land, sea, and air, intricate elements such as the harps’ original strings and loincloths crafted out of bark survived. Felix and Bob Ulrich donated the harps to MIM in 2021.

The harps joining MIM’s collection were used in Ngbandi rituals to praise and tell ancestral stories of important community members from the ruling class. Surviving pairs are rarely found. The harps, along with many other significant acquisitions, will be showcased in MIM’s newest special exhibition, Treasures: Legendary Musical Instruments, opening November 12.