The ever-changing exhibits in the Artist Gallery celebrate the greatest artists in the world—artists such as Elvis Presley®, Roberta Flack, and world-renowned sitār virtuoso Ravi Shankar. Many guests step inside the gallery hoping to find their favorite famous musician, but the new International Masters display aims to share the stories of celebrated artists that many guests might not be aware of.

The new display brings four of the gallery’s international artists and three newly added artists into one exhibit that emphasizes their prestige and skill. The exhibit includes Uzbek doira (frame drum) player Abbos Kosimov, Korean kayagŭm (zither) artist Yi Jiyoung, African pop legend King Sunny Adé from Nigeria, Chinese pipa (plucked lute) virtuoso Wu Man, Arabic nay flutist Mahmoud Effat, and Brazilian composer and guitarist Laurindo Almeida. Ukulele star Jake Shimabukuro is also featured in the display; guests may recognize him from performances at the MIM Music Theater or from his one-of-a-kind Kumu model ukulele on display in Treasures: Legendary Musical Instruments. The showcased artists have surpassed mastery of their instruments and genres to create techniques and music of their own design, becoming symbols of pride for the countries and musical practices they represent.

As new additions to MIM’s Artist Gallery, Kosimov, Yi, and Almeida embody the definition of an international master. Uzbek music and doira ambassador Kosimov is known for his innovative playing techniques and rhythmic mastery, which have added new dimensions to the doira’s sonic capacity, and for his versatility in adapting the doira to various genres and international influences.

“Both Kosimov and Yi have not only a great interpretation of traditional styles of playing but also have established an iconic playing style of their respective instruments,” says Eddie Chia-Hao Hsu, PhD, MIM’s curator for Asia and Oceania.

A prolific composer and performer, Almeida debuted in the late 1940s with pianist Stan Kenton’s band. In addition to earning five Grammy Awards, he is credited on nearly 800 Hollywood studio recordings, dozens of film scores, and some of the earliest fusions of jazz and Brazilian music. 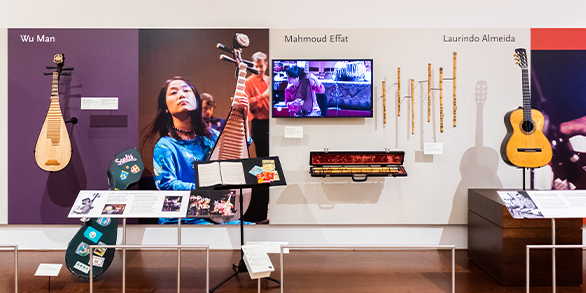